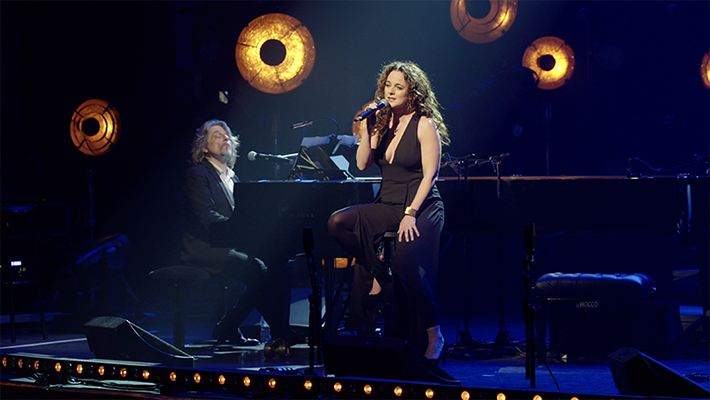 “Isn’t it bliss? asks Stephen Sondheim rhetorically in his most famous creation Send In The Clowns and bliss it is when the thrilling Melissa Errico lets loose for one golden hour of the greatest living composer’s work on her new album Sondheim Sublime.”

“Just re-visited Melissa Errico’s Sondheim Sublime show at Live at Zedel: when she sings “Move On” from Sunday in the Park with George this couldn’t be truer:

Let it come from you

Then it will be new

Give us more to see’

As she connects with Sondheim, we connect with her. It’s not just the ravishing, shimmering vocal tones Melissa Errico brings to Sondheim; it’s also the emotional and intellectual connections she makes to his ambivalence and contradictory feelings. It’s a masterclass in appreciating and understanding his work.”

“Melissa Errico’s masterclass is a must-see for every cabaret wannabe as well as more experienced practitioners who think they’ve cracked this art form but haven’t. She is one of a kind.”

Melissa Errico wins the heart of London! In her tour de force one-woman concert “MELISSA ERRICO SINGS SONDHEIM,” Errico wowed sold-out starry crowds and triumphed in her UK debut at the prestigious Live At Zédel. The show was billed as “Errico’s long-awaited London solo debut, bringing her gorgeous voice, and a unique and unpredictable intelligence, wit and mischief to the music and lyrics of Stephen Sondheim.” She was accompanied on piano by Tedd Firth and percussion by Adam Kovacs. The London critics weighed in with rave reviews:

“What a top-class evening in cabaret can be…Holds the stage through sheer charm…One of the absolutely loveliest voices to enrich both cabaret and musical theater.”

“A glorious musical evening… A voice that knocks your socks off – a rippling stream of clear, crystal notes with a beautiful cadence and a purring, rich vibrato. Add to this her genuineness and humor and you’ve got a voice and personality that captivates the heart and soul.”

A vision in black with long curls cascading down her back, Errico, a big name in the States but barely known over here, quickly has a full house eating out of her hand as she intersperses personal stories about her subject with 18 great Stephen Sondheim songs. Some are familiar like ‘Send in the Clowns’ – and what a lovely, slow, reflective spin she put on that A Little Night Music classic – to the less familiar such as ‘I Remember’, a gorgeous song Sondheim wrote for the 1966 TV mini-musical Evening Primrose, and ‘Goodbye For Now’ written for another movie, this time the 1981 Warren Beatty epic Reds.

Every number is a joy but ‘Loving You’, from Passion, in which Errico played Clara Off-Broadway in 2013, is particularly beautiful and she tackles the tongue-twister ‘Getting Married Today’ from Company with practised confidence. It was back in 2002 that Sondheim championed her for the part of Dot in Sunday In the Park With George at the Kennedy Center in Washington DC, from which she gave us ‘Children and Art’.

And Errico was again on his radar for the City Center Encores! revival of Do I Hear A Waltz? In 2016, Sondheim’s “least favourite” show, as she put it before launching into the title song, because of an unhappy collaboration with Richard Rodgers. As one of Sondheim’s most trusted interpreters, she talks of the time she even persuaded the great man to change some of her words in Sunday in the Park With George and related how, after seeing her in Waltz, he complimented her: “You were wonderful… most of the time” but with a jokey sting in the tail.

Other highlights are ‘The Miller’s Son’ from A Little Night Music, ‘Marry Me A Little, ‘Not While I’m Around’ from Sweeney Todd and ‘Children Will Listen’ from Into the Woods – “but they don’t, do they?” said Errico wryly. She speaks from experience as she has three daughters and is the wife of John McEnroe’s youngest brother Patrick, himself a past Davis Cup captain and winner of 16 doubles titles. There is a wonderful stillness about Errico when she performs, leaving the songs to speak for themselves, and her use of the exaggerated pause, notably a particularly long one at the end of ‘No More’ (from Into the Woods), is a brilliant dramatic device.

Her use of arms and hands is a delight, bringing out the actress in her – she’s a prolific TV performer in non-singing roles – and complementing the purity of her voice. Songs apart, she’s undeniably funny. The anecdotes tumble out in this well-rehearsed show with some inspired arrangements by musical director Tedd Firth. It is ten years since her only previous visit, a brief one to take part in the Palladium revue Jerry Herman’s Broadway, and it is a shame this one clashes with another New Yorker, Shana Farr, doing the songs of Barbara Cook at The Pheasantry.

Errico will be doing two shows on Sunday, 7pm and 9.15pm, when there is the bonus of Julian Ovenden to help out in that marathon double shift. If you can get in, don’t miss her – marvellous Melissa is a bit special.