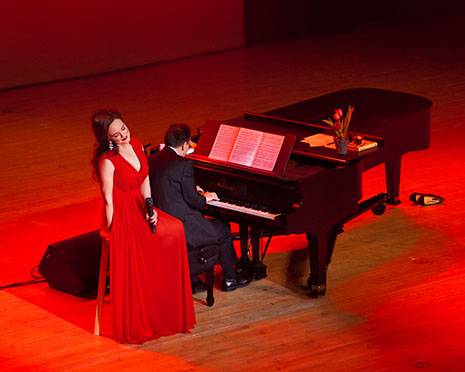 Melissa Errico made her professional debut at age 18 as Cosette in the premiere national tour of Les Misérables and soon after starred in the 1993 revival of My Fair Lady, in which she played Eliza Doolittle. She went on to star on Broadway in High Society, Amour (Tony nomination, Best Leading Actress in a Musical), Dracula, the Musical and Irving Berlin’s White Christmas. She collaborated with Stephen Sondheim on the revival of  Sunday In the Park with George (Dot/Marie at the Kennedy Center), followed by John Doyle’s production of Passion (Clara) for which she was nominated for a sixth Drama Desk Award; and next as Leona in the 2016 City Center Encores! production of  Do I Hear a Waltz? where she has done many shows including One Touch of Venus. At the Irish Rep, she has recently starred in the hit revivals of Finian’s Rainbow (2016) and On a Clear Day You Can See Forever (2018).  For three performances this March 7-9th, 2019, she played The Baker’s Wife in a staged concert of Into The Woods with Alice Ripley, orchestra conducted by John McDaniel.

A frequent contributor to The New York Times, where she has written often about the inner life of the musical theater, Melissa is also a regular columnist for Purist magazine. Her solo CDs include “Blue Like That”  (EMI/Capitol Records), “Lullabies & Wildflowers” (Universal), “Legrand Affair” (Ghostlight/Sony) and “What About Today? Melissa Errico Live at 54 Below” (Broadway Records; CD & DVD). Her most recent release is “Sondheim Sublime” (Ghostlight Records) which the Wall Street Journal called “the best all Sondheim album ever recorded” and The New York Times featured as “the Sondheim album of the year”. Melissa has performed extended runs at Feinsteins/54 Below of her solo concert “Melissa Sings Sondheim”, and in 2018 brought the show to London’s Live at Zedel for her sold-out UK concert debut. The featured performer on the forthcoming PBS “Poetry in America” portrait of Sondheim, Melissa will return to London and to France this spring, to sing still more Sondheim and a little Legrand.