Where: The Sheen Center website as well as its

As part of a celebration of Stephen Sondheim’s 90th birthday, “Poetry in America Live” — a new series from the Sheen Center for Thought and Culture in partnership with PBS’s “Poetry in America” series — will focus on his song “Finishing the Hat” from the musical “Sunday in the Park with George.” This live event will include a performance of Sondheim songs and a discussion of the lyrics to this particular song. Elisa New, host of PBS’s “Poetry in America,” will be joined by the Tony Award nominee Melissa Errico, the New Yorker staff writer and author Adam Gopnik and the musical director Tedd Firth. 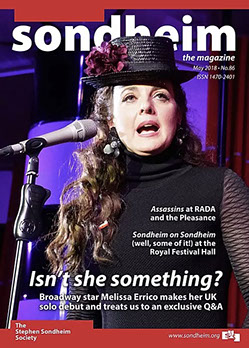 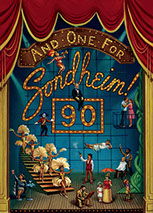 on Their Favorite Sondheim Song” 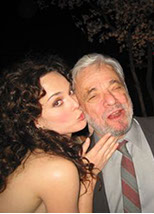 ““Sondheim Sublime” is the best all-Sondheim album ever recorded, in which radiantly warm singing and sensitive, intelligent interpretation are tightly

In her chat with  Rebecca Milzoff, Errico  shares memories of her first-ever Sondheim show, her pen-pal-ship with the composer, and her current dream role.

The Tony nominee celebrates the release of her new album, Sondheim Sublime, with a return engagement at Feinstein's/54 Below.

The Tony-nominated Broadway veteran will be

honored with a portrait at the legendary

A musical meditation from Melissa Errico,

who finds light and wisdom in the Sondheim songbook 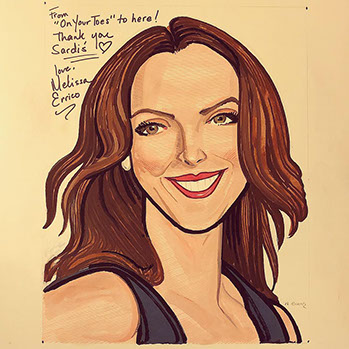 "Since beginning her stage career in the early 1990s, Melissa Errico has illuminated the theatrical world with her radiant presence and her unique intelligence— on stage, in recording and in her writing. With this caricature, Sardi’s celebrates her performances, her concerts, her engaging essays for the New York Times on the actor’s art --  and, especially, her ravishing new tribute album to Broadway’s greatest contemporary composer,  SONDHEIM SUBLIME, which The Wall Street Journal has called “gorgeous & intelligently sung” and The New York Times has called “The Sondheim Album Of The Year.” For all of these achievements, Sardis is proud to recognize Melissa Errico.”

on Her New Sondheim Album”

“Singing the sublime with Melissa Errico”

What the critics are saying about Melissa Errico...

“Not to put too fine a point on it, “Sondheim Sublime” is the best

"Errico is the finest interpreter of Sondheim's music in America today"

“Many have found the sophistication and satire and mordant ambivalence in Stephen Sondheim. With this new CD, Melissa Errico finds a subtler, more soulful Sondheim than the one we thought we knew, sung with the intensity of a secret expressed at long last, with many moments of the sublime.”

“Both Sondheim and sublimity are promised and delivered in Melissa Errico’s newest album. Her emotional, authentic, stirring, gracious, sophisticated interpretations of 15 Sondheim tunes are delivered with her delicate, dulcet, relaxed, pleasant, unpretentious, murmuring warble of a vibrato. Refinement, subtlety, and shadings are ever-present here, even in songs that are not always thought of as ballads, such as “Sooner or Later” (Dick Tracy)... “Marry Me a Little” will stir you, “Goodbye for Now” will touch you, “Children Will Listen” will move and excite you, “No More” will inspire you, and “Children and Art” may just wreck you.”

“Her familiarity with the way the [Sondheim’s] songs work to advance character and story in vivo naturally informs her in vitro style, which is actorly to begin with. The hysterical bridal lament “Getting Married Today,” from “Company,” found her crawling around the floor of the cabaret’s tiny stage before winding up cocooned under the piano while her inventive accompanist, Tedd Firth, played on. Her fierce “Loving You” from “Passion” — she also sang two gorgeous duets from that show with Ryan Silverman — brought unusual attention to the two distinct thoughts often blurred in the line “I will live and I would die for you. That attention to the lyrics and their rush of harsh “wisdoms” was Ms. Errico’s keynote. She refreshed the cabaret staple “The Miller’s Son,” from “A Little Night Music,” by setting up each of its three verses as a different escape fantasy. In a lightly jazzed “Not While I’m Around,” from “Sweeney Todd,” she demonstrated how the meaning that is locked in tiny verbal gestures can be released with bold phrasing. (“I don’t need to, I would never / Hide a thing from you / Like some.”). She shone in selections, like the three from “Passion,” whose lushness she could relax into without underlining. Her full-bodied soprano also proved ideally suited to songs of regret, like the rarity “It Wasn’t Meant to Happen,” cut from “Follies.””

“Errico is a powerhouse known for her impeccable vocal phrasing and tantalizing journeys through song…this savvy songstress's knowledge and respect for the music she sings pays off. It's what elevates this cabaret act to something more than just a collection of songs but an actual experience for all who were fortunate enough to witness it. You could literally hear the audience either left breathless between songs, or actually talking back to her as she recounted some of her favorite Sondheim anecdotes, and was able to strike a careful balance of sharing personal encounters with the composer, with staying humble and accessible.”

“Recipe for a superb evening of cabaret: Start with a glowing, top-of-the-class Broadway actress and singer; add songs written by one of the theater’s best-ever lyricists/composers; all elements were on hand for Melissa Errico at Feinstein’s/54 Below.”

“Sometimes five stars aren’t enough. Such was the case with the hypnotic New York star Melissa Errico’s triumphant solo UK debut at Zédel’s, 90 minutes of pure bliss...Songs apart, she’s undeniably funny. The anecdotes tumble out in this well-rehearsed show with some inspired arrangements by musical director Tedd Firth. Every number is a joy but ‘Loving You’, from Passion, is particularly beautiful. If you can get in, don’t miss her – marvelous Melissa is a bit special."

it goes without saying that she sings divinely.”

“[Her] singing is impeccable…a former ingenue, Melissa has ripened

“Divine…the voice of enchantment…one of the most valuable assets of the musical theater."

and sweet as her warm smile”

“She is one of the best singing actors we have.”

“Errico's lush soprano is a seduction in itself.”